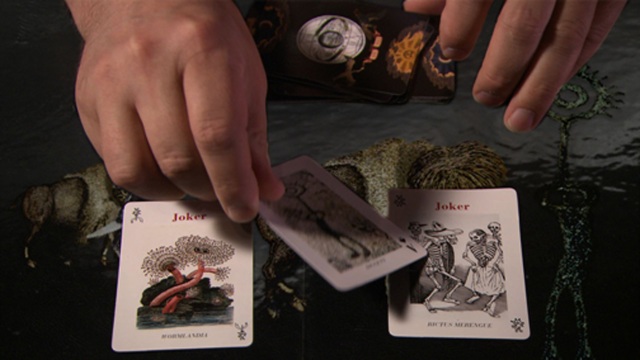 When the deck is stacked, how do you deal?

YESNO is a playful view of a planet on the verge of a nervous breakdown.
Humphrey Bogart meets Werner Herzog in the heart of darkness.
A conjurer shuffles bison, emu and orca in a game of extinction.
Leonard Cohen voices a last tango over a flood of images that mix live action and
animation, poetry and music, calligraphy and DNA.

Based on the 2006 book Yesno, by eminent Canadian poet
DENNIS LEE, this seven-minute film takes an new approach to transforming
poetry into cinema. Dennis Lee’s words are voiced by a pantheon of Canadian
poets, including LEONARD COHEN, MICHAEL ONDAATJE, MARGARET
ATWOOD, D’BI YOUNG, KAREN SOLIE, and Lee himself. Jiving between
hope and despair, and between dark comedy and tender pathos, an apocalyptic
suite takes us from the folds of the cerebral cortex to the jungles of Fitzcarraldo
and The African Queen. Sleight-of-hand by conjurer DAVID BEN forms the
connective tissue. The original score/soundscape comes from award-winning
composer OWEN BELTON, who has created music for the National Ballet of
Canada (Emergence). The director of photography is  NICHOLAS DE PENCIER
(Act of God). The animation director is NICK FOX-GIEG, who won the award for
best animated short (The Orange) at the 2010 SXSW film festival. Yesno was
produced, directed and edited by Brian D. Johnson, veteran film critic at
Maclean’s magazine. It was executive-produced by RON MANN (Grass) and
LOUISE GARFIELD (The Hanging Garden).

Yesno is a seven-minute English-language short, shot on HDCAM, and
produced in Canada in 2010 with the financial assistance of Bravo!FACT, and
under the guidance of Bravo!FACT Executive Director JUDY GLADSTONE. It
was completed in May 2010. The soundtrack is mixed in Dolby 5.1.